This post was just too big to have all at once. This segment is about the world famous Carlsbad Raceway, the home of one of the funnest motocross tracks ever and multiple USGP battles. Oh so much more after the jump

Now we’re going on to the second part of my love for Carlsbad, the motocross track! A few years after I was there skating, I got pretty into motocross and Carlsbad was, by far, my favorite track (I would still rival it with Mammoth as my favorite all-time track to ride). I rode MX occasionally there for a few years on Saturdays with REM and loved it. Later on, I raced there in the Christmas GP’s basically up until they closed the track. I got my first (and so far last) win there. 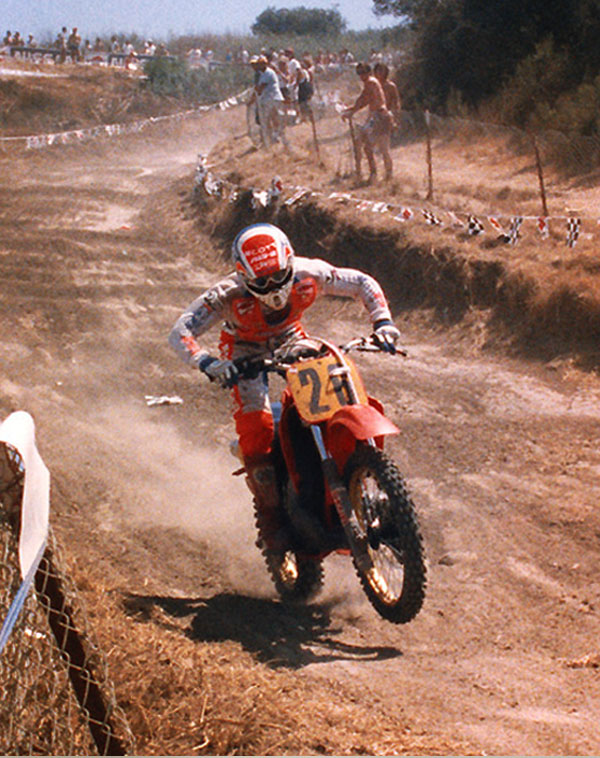 The track was so fun to ride, I can only imagine how cool it would have been to be able to see it when it was in it’s glory and the USGP was there (for some strange reason I never knew of the race going on 20 minutes from my house). The big race there while I was racing was called The Commotion by the Ocean. Quite a few pretty big name pros came out for that race, it was fun to watch them ride on one of my “home” tracks.

Here’s an overview of the entire track. Click on the picture above to open a larger version (3085px wide) so you can actually see stuff. The white lines are the MX course, the red lines are the GP course and the blue outline is the skatepark. Click here if you’d like a full size version of the track / facilities without the lines for the tracks. Here’s just the MX track. Click on the image above to see it in full size (974px wide) or click here if you want just the motocross track with no lines.

I’m writing this run through of the track from my memory about 18 years ago, so bear with me if some things are wrong. I raced there in the early / mid 90s when REM was running the races. I really liked racing there not only because the track was super fun but also because they didn’t even open the gates till 8am or so but yet you were out of there by 2pm, so it wasn’t a full day affair like many other tracks that you went to.

2. Right after the first turn was the only “jump” on the track, if you even want to call it that. The track was the slickest, slimiest track you’ve ever seen after they watered it. I think it’s the clay in the dirt.

4 / 5. The main / larger uphill and downhill. Going down was extra fun, you could ride along / up the walls on either side of the downhill (it was about 4′ underground) to miss the big bumps / jumps.

6. There was a weird beam here going across the track. I imagine it was from the USGP days for people to cross or for cameras and stuff.

7. This was an optional section which I think I only raced once. I think it got flooded really easy.

8. Another optional section, I believe they called this the “Rattlesnake” area.

9. I believe this was Devil’s Drop, which was pretty much straight up at the top and bottom. It was pretty fun. It was a good place to spectate from up top of the ridge, also. Right between 9 & 10 was the finish line, I don’t really know why it was there since it didn’t seem like a place to finish but it was.

10. This was the horeshoe turn and it was super fun going either direction

The layout for the GP track, click on the picture above to open it up full size in a new window. The GP track generally consisted of combining the MX track and the dragstrip.

1) You started in the middle of the facility via the “clutch hand on your helmet” method.

2) A weird section on top of of the uphill. Personally, I would have much rather ridden the rest of the main MX track than this but whatever. This section didn’t exist when I was racing there in the 90’s

3) A weird alternate downhill. Again, this wasn’t there in the 90’s and I would have much rather ridden the legit MX track. Maybe the general GP crowd didn’t like the bumpy downhill though.

4) This was an alternate that they used at one of the GP’s, completely cutting off most of the MX track, a big letdown in my book.