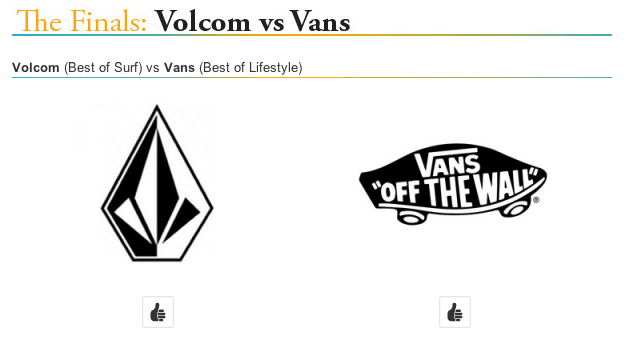 in Branding, Check this out, Skateboarding / Snowboarding
0 Comments

So, this is it, we’ve reached The Finals. Thousands of votes cast and we’re down to two logos. Both are icons in the industry. 90s upstart, Volcom with the Volcom Stone vs 60s originator, Vans’ and their “Off the Wall” Skateboard. Round 5 was another close one. Both Powell & Burton had the early lead, Vans overtook Burton midweek and Volcom had a late day surge on Friday to overtake Powell by a few votes. This one’s for all the marbles and the illustrious World Champion of the World / best logo in action sports title.

Head on over and vote for the World Champion of the World in the Finals of our March Logo Madness logo competition.